Take a walk from Dorćol to Ada Ciganlija

Studentski Trg – Students Square
The oldest square of Belgrade today is surrounded by several universities. A favorite place for socializing both students and other citizens within the University Park.

Bajrakli Džamija – Bajrakli Mosque
Mosques and masjids existed in an imposing number during the reign of Turkey by Belgrade. The number that was approaching the numbers of three hundred objects was reduced to this preserved and active building of Islamic religious architecture.

Kula Nebojša – Nebojša Tower
In the lower town, at the entrance to the former Danube harbor. She is not afraid of the enemy, unenviable, and hence her name. It was founded around 1460 as a defense against the attack by the Turks. When the Turks nevertheless managed to conquer it in 1521, they soon turned it into a prison, making it a dark symbol of Belgrade. It was also destroyed by the great Greek patriot Riga from Fera.

Dorćolski kej – Dorcol Promenade
Walk or ride a bike along the river.

Along the Danube, across the Sava River you can reach the Ada Ciganlija – the sea of Belgrade. You will also walk along the promenade Savamala – Belgrade Water Front, Belgrade on the rivers in a slightly different way. 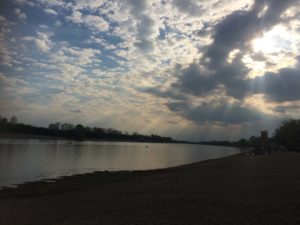 Ada Ciganlija
River island, artificially divided into the peninsula. It became the sea of Belgrade just 4 km from the city center and a sports and recreational center. A number of people are attracted by the arranged bicycle and hiking trails, well-kept beaches and the quality of bathing water. In summer, the numbers travel to a hundred thousand people a day, weekends even up to three hundred thousand people. The lake is suitable for water sports, so it is often the host of sport rowing and kayaking championships. In the evening, Ada turns to one of the places for a great time and night life.