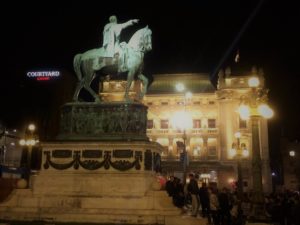 On the Republic Square, erected in 1882, as a symbol of the liberation of Serbia from the Ottoman authorities. A very good meeting point, a place known as “By the horse” in a local sleng, the cause of arguments to these who consider this name disrespective. However, everyone is so used to this slang name, so you will never hear the monument being called “by the Prince”. 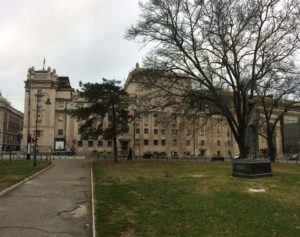 Palata Albanija – Palace Albania
First skyscraper in Belgrade, 1939. At the time of construction, it was the tallest building in South-eastern Europe. It was named “Albania”, just as the same as the building that was previously located at that place. An inconspicuous and deserted tavern, although the favorite tower was demolished, and the palace “Albania” continues to proudly stand as the most important achievement of Yugoslav modern architecture. 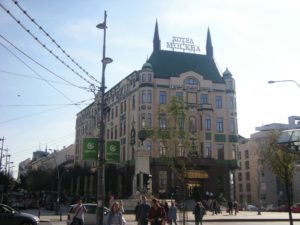 Terazijska Česma – Terazije fountain
At Terazije, the shape of a stone pillar, about 8m high. It was opened in 1860, in honor of the re-arrival of Prince Miloš. For some time now, with the appearance of the album dedicated to the World Cup in football, the fountain is becoming a permanent place for gathering sticker exchangers. For everyone from 7 to 77, or more! 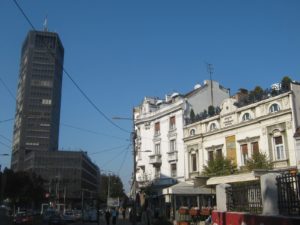 Beogradjanka Palace
Built in 1974, tall 101 m, 24 floors. I remember her automated stairs as part of a cheerful childhood, when everything from needle to locomotive was bought at the Department Store Belgrade. Endless circuits of staircase at that time looked like they were from the spacecraft. 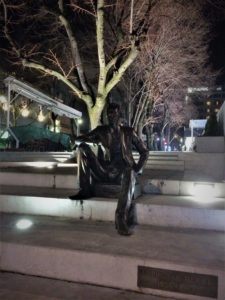 Njegoseva – Flower square
I love that this reconstructed square today making company to Mr.Pekic. Today is the market where you can enjoy a good coffee and atmosphere.

SKC – Student Cultural Center
The building projected to associate with a medieval castle has had a variety of purposes throughout history. In 1895 an officer’s home was opened. In 1903, assassination of the king and the queen was committed in the building, known as the May Revolution. At one time, there was the House of Udba as well as the first place of gathering at rock and roll parties. 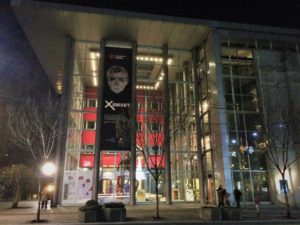 Yugoslav Drama Theater
Founded in 1947. In October 17th 1997 was burnt to the ground, and it was rebuilt. 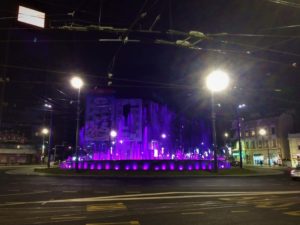 Slavija
One of the busiest crossroads in the city. There is also a legend of “haunting”, a series of unsuccessful projects for the construction of a modern department store in Slavia, but none has been realized yet. From 2017, instead of Dimitrije Tucovic, for which he also had a name for a time, the music fountain is adorned with Slavija. It has become the object of glorifying her beauty on one side, but also the subject of disagreement on the other side, since almost the same number of those who believe that the project has been missed and that its place certainly is not within the traffic chaos that governs it. 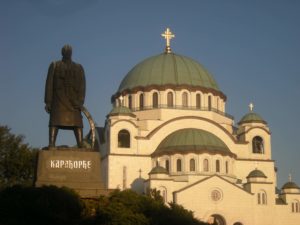 Hram Svetog Save – Temple of Saint Sava
The largest Orthodox temple, built since 1935 in several phases.