Belgrade fortress
Open to the public. A specimen of one of the oldest preserved fortresses in Europe, and some of its parts are 600 years old. It is located in the biggest Belgrade’s park, Kalemegdan, which brings the freshness of the day, sun and pleasant breezes and in the evening it turns into a mysterious murmur of leaves and a blink of light. The promenade from which you can see Novi Beograd also shifts the pictures as the day passes .. View of two rivers which Belgrade is proud with!

Stambol Kapija (Stambol Gate)
(Inner) on Kalemegdan – built around 1750 and named after Istanbul (Stambol) because it was in the extension of the Constantinople road.

Pobednik – The Winner
Triumphal monument, work of sculptor Ivan Meštrovic. One of the most striking symbols of Belgrade. Though before its very installation, there were so many disagreements and disapproval of the location, but it seems this was the only the place for it! The view from Kalemegdan would not be the same if The winner was not your companion. 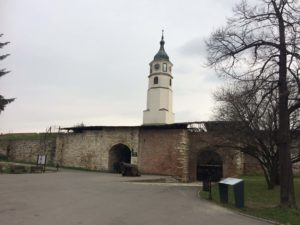 Sahat Kula – Clock tower
The passage of the gate is covered with semi-shaped stone vault, and on both sides there are two rooms and niches in oriental style.

Thanksgiving Monument to France
Just as The Winner, the work of sculptor Ivan Mestrovic. Symbol of friendship and cooperation between Serbia and France during World War I.

Crkva Svete Petke (Church of Saint Petka)
Raised at the site of a miraculous source by an unknown benefactor approximately at the same time when the remains of St. Peter’s were relocated to Belgrade. Water from the source, by faith, protects the spirit and body, and Sv.Petka keeps, protects and treats women with special care.

Vojni muzej – Military museum
Opened for visitors every day, except Monday, from 10-17h. The first museum exhibition was opened in 1904, on the occasion of the centenary of the First Serbian Uprising. www.muzej.mod.gov.rs/

Rimski Bunar – Roman Well
A large well was built between 1717 and 1731. Since the origins of the well began to swell in the lectures, the name Roman Well was giving to it, as it was believed that it was built by the Romans during the Austrian rule.

Institute for the Protection of Cultural Monuments of Belgrade
The institution of culture of national importance, on the plateau of the upper city.

Jura Avantura – Jura Adventure
Dino Park on Kalemegdan – for all from 3 to 103. www.dinoparkkalemegdan.rs/

Basketball courts
Two of our most famous sports clubs (Partisan and Red Star) have won the most beautiful part of Kalemegdan in the development of sports. Kalemegdan once again confirmed that it is “the lungs” of Belgrade.