Come, visit Belgrade and it will open a part of it’s soul for you too. I sincerely believe that I am not biased when I say that Belgrade is a city that loves anyone who visits it. It even seems to me that the people who live in it treat the traveler with the intention, more and more each day, even more importantly nods their head as if they wanted to say to each other “you see, there is much to see in Belgrade, they chose to visit our city”.

It is likely that this way of thinking originates from the events that have tried to separate Belgrade and Serbia from the world, turning from it’s set goal – that Belgrade is a part of the world. For many years, Belgrade was fenced off with bans, sanctions, insanity, wars, attacks, in one word – troubles, Belgrade slowly collapsed and lost it’s glow … and returned back. To be itself again. With it’s people in it. To be developed and progressed for them. The winner.

Belgrade has its soul, extends to the confluence of two rivers, the Sava and the Danube, and mainly everything else goes in two tracks … sports rivalry, political determination, music and who knows what else, which is to be expected from an intersection of Eastern and European culture. And that’s Belgrade. Belgrade where everyone finds his track.

Belgrade is the Capital and largest city of the Republic of Serbia.

Accommodation should not be a problem, the offer is various, supplemented daily with newer apartments with a variant of rent amount per day, but also a significant improvement in the hotel’s offer, with the tendency of further growth.

Knez Mihailova, the main city pedestrian zone, the direction of Terazije – Kalemegdan, is something that could be your starting point from any side. Somewhere in the middle of the street itself, 800 m long is a pyramid landmark, with a four sided sign: 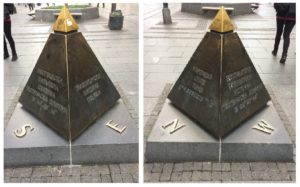 And wherever you go, you won’t be wrong!

Have a nice meal near Tashmajdan…or call for delivery: